Here’s a popular song sung by British soldiers during the First World War. I love it, though it can seem a little obscure today. It goes a little something like this:

It takes the tune of an old Christian hymn- ‘The Church’s One Foundation’, sung stodgily here on YouTube- and irreverently switches that song’s worshipful lyrics for amusing self-deprecation. The soldiers who sang this song were celebrating their own inefficient humanity, caught as they were in the European war machine.

The song mentions Fred Karno and ragtime. For years I didn’t know who Fred Karno was. I knew what ragtime was, however: in fact, it was listening to a ragtime song that prompted me to write this post. Stick with me for a few more sentences and you’ll get to hear some ragtime yourself. 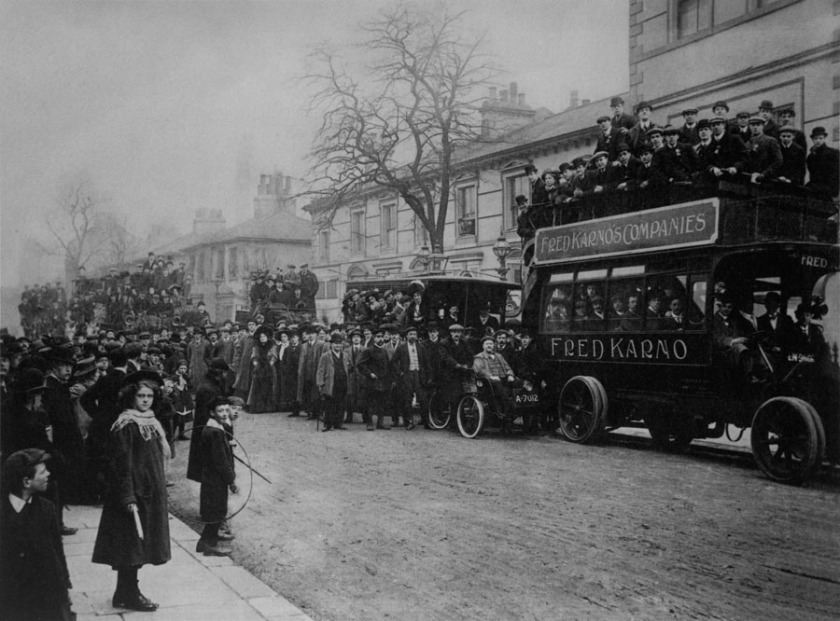 Fred Karno was Britain’s most famous talent spotter and impressario in the twenty years before the First World War. “Karno was the star-making Simon Cowell of his day”, Tim Brooke-Taylor says, and he’s right: Karno found comedians like Charlie Chaplin and Stan Laurel and made them stars before either went on to Hollywood and became global entertainers. There’s a nice article about Karno on this site dedicated to his birthplace, Exeter.

Music hall took its name from the music halls all around the country where the popular entertainment shows played. The music hall show consisted of a variety of performers: singers, comics and speciality acts like magicians, memory men and the like. Karno was famous for his touring troupe of entertainers: a motley crew who were known as ‘Fred Karno’s Army’. This group of balladeers and clowns became proverbial for chaos and disorganisation, hence ‘We are Fred Karno’s Army’. Imagine our soldiers in Afghanistan proclaiming they were ‘Simon Cowell’s Army’ or on a ‘Britain’s Got Talent’ tour abroad, and you get a sense of the bloody-minded pride and sarcastic mockery of the British Army going on here (and indeed, in other versions of the song the impresario’s name is replaced by Kitchener’s).

So what, then, was the ‘ragtime infantry’?

Well, ragtime was the popular music of the age. Ragtime (along with Blues music) lies at the very beginning of modern pop: ragtime is at the roots of a tree that leads to the Beatles and Motown, David Bowie and Michael Jackson, Jay-Z and Janelle Monae. Ragtime took European music– jigs and marches played on piano– and mixed them with African American music, with its syncopated or ‘ragged’ rhythms. What was produced was a new form of dance music, played mainly on piano, pioneered by black artists like Scott Joplin and his ‘Twelfth Street Rag’.

Here are some links to Joplin’s music, so you’ve got an idea of the kind of ragtime that was popular with the troops during the war. Some of his songs you may have heard already: like ‘The Entertainer’, perhaps; or another, his ‘Maple Leaf Rag‘. Last of all, I’ve found a clip of the Jazz king, Louis Armstrong, playing ‘Twelfth Street Blues’ many years later, in 1961. When Armstrong plays you really get a sense of the kind of pleasure ragtime gave, played live.

This feeling of fun is sometimes absent, understandably, when we think about the First World War. It can seem sometimes like all this happened to people from a dismal black-and-white world. Yet ragtime, and the happy sarcasm of the soldiers in their uncensored songs allows us a better understanding of the happier lives and better times of the ragtime infantry.

3 thoughts on “We are the ragtime infantry!”

for A-level students and readers of World War One poetry and prose. Read detailed notes on A-level texts and join the discussion. Take a look at my ‘Ask Mr. Griffiths’ and ‘Welcome’ pages to find out more about this blog.

To find a list of all posts, check out the Archive at the top of the page.

I began this website in 2010 to support students in their A-Level studies at a school in Wandsworth, London.

Before the recent centenary  internet resources for young students of Great War literature were scarce. From the beginning this blog has provided free revision materials to students, found links to interesting resources, and sought to encourage a wide-ranging exploration of the literature of the First World War.

To date I’ve had over one and a half million visits from curious readers around the world. Welcome!

Are you studying towards your A-level exams and need some help?

I am an A-level teacher of 13 years experience with a track record of helping students of all abilities progress in their studies.

If you require a tutor who is familiar with your course and who can help you to improve your coursework and prepare you for your exams, then email me. We’ll set up a web meeting to discuss your needs and plan out a way forward for you in your studies.

I look forward to hearing from you!

Move Him Into The Sun

This blog has hosted